In my last post I referenced a paper with David Rothschild that we posted earlier this month. The main goal of that work was to try to examine the manner in which new information is transmitted to asset prices, and to distinguish empirically between two influential theories of trading. To accomplish this we examined in close detail every transaction on Intrade over the two week period immediately preceding the 2012 presidential election. We looked at about 84,000 transactions involving 3.5 million contracts and over 3,200 unique accounts, and in the process of doing so quickly realized that a single trader was responsible for about a third of all bets on Romney to win, and had wagered and lost close to 4 million dollars in just this one fortnight.

While this discovery was (and remains) incidental to the main message of the paper, it has attracted a great deal of media attention over the past couple of days. (About a dozen articles are linked here, and there have been a couple more published since.) Most of these reports state the basic facts and make some conjectures about motivation. The purpose of this post is to describe and interpret what we found in a bit more detail. Much of what is said here can also be found in Section 5 of the paper.

To begin with, the discovery of a large trader with significant exposure to a Romney loss was not a surprise. There was discussion of a possible "Romney Whale" in the Intrade chat rooms and elsewhere leading up to the election, as well as open recognition of the possibility of arbitrage with Betfair. On the afternoon of election day I noticed that the order book for Romney contracts was unusually asymmetric, with the number of bids far exceeding the number of offers, and posted this: 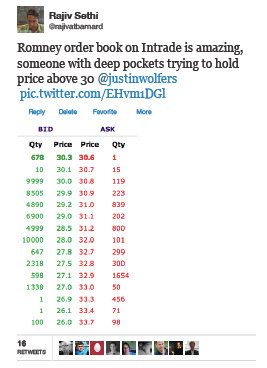 This was circulated quite widely thanks to the following response: 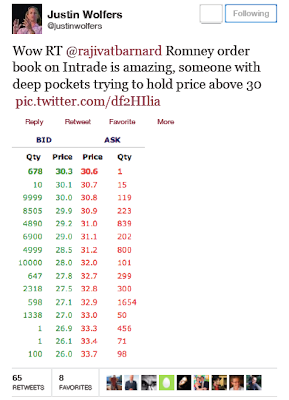 In a post on the following day I explained why I thought that is was an attempt at manipulation:


Could this not have been just a big bet, placed by someone optimistic about Romney's chances? I don't think so, for two reasons. First, if one wanted to bet on Romney rather than Obama, much better odds were available elsewhere, for instance on Betfair. More importantly, one would not want to leave such large orders standing at a time when new information was emerging rapidly; the risk of having the orders met by someone with superior information would be too great. Yet these orders stood for hours, and effectively placed a floor on the Romney price and a ceiling on the price for Obama.

Ron Bernstein at Intrade has explained why the disparity with Betfair is not surprising given the severe constraints faced by US residents in opening and operating accounts at the latter exchange, and the differential fee structure. Nevertheless, I still find the second explanation compelling.

The strategic manner in which these orders were placed, with large bids at steadily declining intervals, suggested to me that this was an experienced trader making efficient use of the available funds to order to have the maximum price impact. The orders lower down on the bid side of the book served as deterrents, revealing to counterparties that a sale at the best bid would not result in a price collapse. This is why I described the trader as sophisticated in my conversations with reporters at the WSJ and Politico.  Characterizing his behavior as stupid presumes that this was a series of bets made with in the conviction that Romney would prevail, which I doubt.

But if this was an attempt to manipulate prices, what was it's purpose? We consider a couple of different possibilities in the paper. The one that has been most widely reported is that it was at attempt to boost campaign contributions, morale, and turnout. But there's another very different possibility that's worth considering.

On the afternoon of the 2004 presidential election exit polls were leaked that suggested a surprise victory by John Kerry, and the result was a sharp rise in the price of his Tradesports contract. (Tradesports was a precursor to Intrade.) This was sustained for several hours until election returns began to come in that were not consistent with the reported polls. In an interesting study published in 2007, Snowberg, Wolfers and Zitzewitz used this event to examine the effects on the S&P futures market of beliefs about the electoral outcome. They found that perceptions of a Kerry victory resulted in a decline in the price of the index, an effect they interpreted as causal. The following chart from their paper makes the point quite vividly: 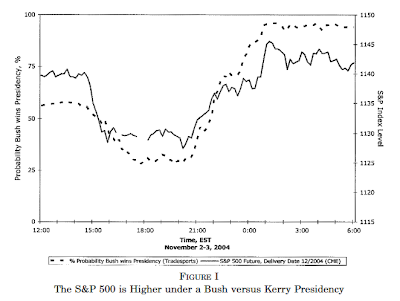 Motivated in part by this finding, we wondered whether the manipulation of beliefs about the electoral outcome could have been motivated by financial gain. If Intrade could be used to manipulate beliefs in a manner that affected the value a stock price index, or specific securities such as health or oil and gas stocks, then a four million dollar loss could be easily compensated by a much larger gain elsewhere. Could this have provided motivation for the behavior of our large trader?

We decided that this was extremely unlikely, for two reasons. First, the 2004 analysis showed only that changes in beliefs affected the index, not that the Intrade price caused the change in beliefs. In fact, it was the leaked exit polls that affected both the Intrade price and the S&P 500 futures market. This does not mean that a change in the Intrade price, absent confirming evidence from elsewhere, could not have a causal impact on other asset prices. It's possible that it could, but not plausible in our estimation.

Furthermore, the partisan effects identified by Snowberg et al. were completely absent in 2012. In fact, if anything, the effects were reversed. S&P 500 futures reacted negatively to an increase in perceptions of a Romney victory during the first debate, and positively to the announcement of the result on election day. One possible reason is that monetary policy was expected to be tighter under a Romney administration. Here is the chart for the first debate: 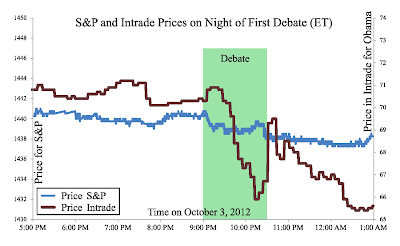 The index falls as Romney's prospects appear to be rising, but the effect is clearly minor. The main point is that any attempt to use 2004 correlations to influence the S&P via changes in Intrade prices, even if they were successful in altering beliefs about the election, would have been futile or counterproductive from the perspective of financial gain.

This is why we ultimately decided that this trader's activity was simply a form of support to the campaign. While four million dollars is a fortune for most of us, it is less than the cost of making and airing a primetime commercial in a major media market. In the age of multi-billion dollar political campaigns, it really is a drop in the bucket. Even if the impact on perceptions was small, it's not clear to me that there was an alternative use of this money at this late stage that would have had a greater impact. Certainly television commercials had been largely tuned out by this point.

It's important to keep in mind that attempts at manipulation notwithstanding, real money peer-to-peer prediction markets have been very effective in forecasting outcomes over the two decades in which they have been in use. Furthermore, as I hope my paper with David demonstrates, the simplicity of the binary option contract makes the data from such markets valuable for academic research. It is true that participation in these markets is a form of gambling, but that is also the case for many short-horizon traders in markets for more traditional assets, especially options, futures and swaps. The volume of speculation in such markets exceeds the demands for hedging by an order of magnitude. From a regulatory standpoint, there is really no rational basis for treating prediction markets differently.
Posted by Rajiv at 9/26/2013 02:29:00 AM