Back in October 2012 I got an unexpected email from Wendy Carlin, Professor of Economics at University College London, asking me to join her and a few others for a meeting in Cambridge, Massachusetts, to be held the following January. The goal was to "consider how we could better teach economics to undergraduates." Wendy motivated the project as follows:

People say that altering the course of the undergraduate curriculum is like turning around a half a million ton super tanker. But I think that the time may be right for the initiative I am inviting you to join me in proposing.

First the economy has performed woefully over the past few decades in most of the advanced economies with increasing inequality, stagnant or declining living standards for many, and increased instability. Second, in the public eye economics as a profession has performed little better; with many of our colleagues offering superficial and even incorrect diagnoses and remedies. Third, what economists now know is increasingly remote from what is taught to our undergraduates. We can teach much more exciting and relevant material than the current diet... Fourth, the economy itself is grippingly interesting to students.

I think that a curriculum that places before students the best of the current state of economic knowledge addressed to the pressing problems of concern... could succeed.

I attended the meeting, and joined a group that would swell to incorporate more than two dozen economists spread across four continents. Over the next eighteen months, with funding from the Institute for New Economic Thinking, we began to assemble a set of teaching materials under the banner of Curriculum Open-Access Resources in Economics (CORE). 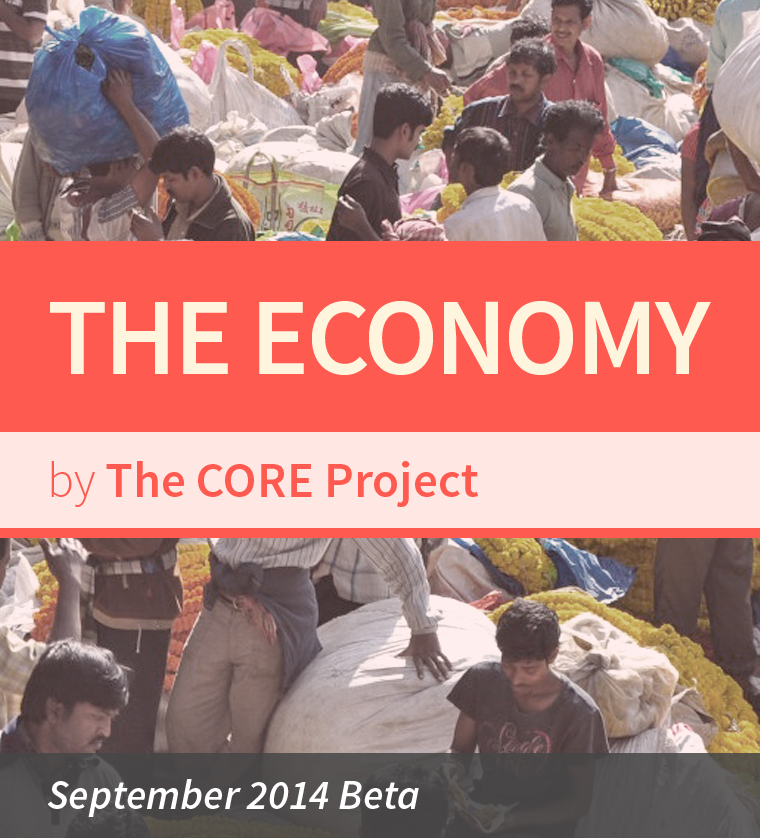 A beta version of the resulting e-book, simply called The Economy, is now available free of charge worldwide to anyone interested in using it. Only the first ten units have been posted at this time; the remainder are still in preparation. The published units cover the industrial revolution, innovation, firms, contracts, labor and product markets, competition, disequilibrium dynamics, and externalities. For the most part these are topics in microeconomics, though with a great deal of attention to history, institutions, and experiments. The latter half of the book, dealing with money, banking, and aggregate activity is nearing completion and is targeted for release in November.

It is our hope that these materials make their way in some form into every introductory classroom and beyond. Instructors could use them to supplement (and perhaps eventually replace) existing texts, and students could use them to dig deeper and obtain fresh and interesting perspectives on topics they encounter (or ought to encounter) in class. And anyone interested in an introduction to economics, regardless of age, occupation or location, can work through these units at their own pace.

The unit with which I had the greatest involvement is the ninth, on Market Dynamics. Here we examine the variety of ways in which markets respond to changes in the conditions of demand and supply. The focus is on adjustment processes rather than simply a comparison of equilibria. For instance, we look at the process of trading in securities markets, introducing the continuous double auction, bid and ask prices, and limit orders. We examine the manner in which new information is incorporated into prices through order book dynamics. The contrasting perspectives of Fama and Shiller on the possibility of asset price bubbles are introduced, with a discussion of the risks involved in market timing and short selling.  Markets with highly flexible prices are then contrasted with posted price markets (such as the iTunes store) where changes in demand are met with pure quantity adjustments in the short run. We look at rationing, queueing and secondary markets in some detail, with reference to the deliberate setting of prices below market-clearing levels, as in the case of certain concerts, sporting events, and elite restaurants.

I mention this unit not just because I had a hand in developing it, but to make the point that there are topics covered in these materials that would not ordinarily be found in an introductory text. Other units draw heavily on the work of economic historians, and pay more than fleeting attention to the history of ideas. The financial sector makes a frequent appearance in the posted units, and will do so to an even greater extent in the units under development.

But far more important than the content innovations in the book are the process innovations. The material was developed collaboratively by a large team, and made coherent through a careful editing process. It is released under a creative commons license, so that any user can customize, translate, or improve it for their own use or the use of their students. Most importantly, we see this initial product not as a stand-alone text, but rather as the foundation on which an entire curriculum can be built. We can imagine the development of units that branch off into various fields (for use in topics courses), as well as the incorporation of more advanced material eventually making its way into graduate education.

So if you're teaching an introductory economics course, or enrolled in one, or just interested in the material, just register here for complete access without charge. We will eventually set up instructor diaries to consolidate feedback, and welcome suggestions for improvement. This is just the start of a long but hopefully significant and transformative process of creative destruction.
Posted by Rajiv at 9/06/2014 08:46:00 AM 2 comments: