From Order Books to Belief Distributions

In my last post I argued that the price at last trade in a prediction market doesn't generally correspond to the belief of an average or representative trader in any meaningful sense, and ought not to be interpreted loosely as the "perceived likelihood according to the market" that the underlying event will occur.

In contrast, the order book, which is the collection of all unexpired bids and offers that cannot currently be matched against each other, contains a wealth of information about the distribution of trader beliefs. Under certain assumptions about the risk preferences of market participants, one can deduce a distribution of trader beliefs from this collection of standing orders. The imputed distribution may then be used to infer what the average trader (in a well-defined sense) perceives the likelihood of the underlying event to be. Furthermore, it can be used to gauge the extent of disagreement about this likelihood within the trading population.

To illustrate, consider the order book for the contract PRESIDENT.DEM.2012, which pays $10 if the official nominee of the Democratic Party wins the next presidential election. At the time of writing my last post, the collection of unexpired and unfilled orders looked like this:

Prices are expressed as percentages of face value, so the highest bidder was willing to pay $6.25 per contract, while the lowest offer was at $6.29 per contract. The frequency distributions of orders on the two sides of the market were as follows: 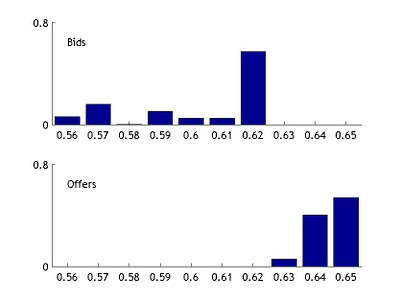 These distributions necessarily have disjoint supports, otherwise some orders would be matched and exit the book. The median bid was 62.0 per contract, while the median offer was 64.6.

How might one deduce a belief distribution from this data?

The first point to note is that anyone placing an order that cannot immediately be filled (and does not immediately expire) faces two kinds of risk. There is the obvious risk that the event may or may not occur; even those whose orders trade immediately are exposed to this. But for an order that remains in the book for some time there is a second source of risk: new information might arrive that substantially alters the likelihood that the event will occur, and results in the order being matched before it can be removed. Given these two sources of risk, traders will post bids at prices that are below their subjective estimates of the likelihood that the event in question will occur. Similarly, those who post offers to sell will do so at prices that lie above their subjective estimates of this likelihood.

A simple way to take these effects into account is to assume that the risk preferences of traders are given by a linear mean-variance objective function of the kind that may be found in any standard text on Investments, with risk aversion parameter A. As an example to illustrate the procedure, suppose that all traders have the same degree of risk-aversion given by A = 0.15, and that buyers post the highest price that they are willing to pay for the asset, while sellers post the lowest price that they are willing to accept. Then the order distribution implies the following distributions of beliefs on the two sides of the market: 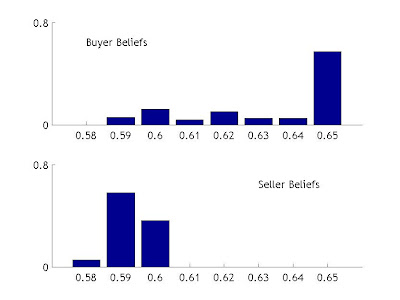 Note first that buyers on the whole assign greater likelihood to the occurrence of the underlying event than sellers do, even though all bid prices lie strictly below the lowest of the offer prices. This is a direct consequence of risk-aversion, which induces buyers to post prices below their subjective beliefs and sellers to offer at prices above theirs. The median buyer belief is 0.65 while the median seller belief is 0.59.

Second, buyer beliefs are spread across a wider range than are the beliefs of sellers. This simply replicates a pattern in the order book, which is characterized by many large bids at varying prices but a concentration of offers in a narrower price range.

Third, the belief supports are not disjoint: there is a range of beliefs that is represented on both sides of the market. These beliefs probably correspond to orders placed by market makers who simultaneously place bids and offers with the aim of profiting from the spread. For instance, the bid for 200 contracts at 56.6 and the offer of 200 at 65.0 both imply an imputed belief of about 0.60 under the assumed value for the risk-aversion parameter. It is quite conceivable, indeed very likely, that these orders were placed by the same individual.

Since bids are more numerous than offers, this aggregate belief distribution lies closer to that for buyers. The median belief in this case is 0.63, which happens to be slightly above the price at last trade.

This is one way of making precise the idea of "the perceived likelihood according to the market." Under the specifications adopted here, this perception is close to the equilibrium price. But it need not be in general. Higher values of the risk-aversion parameter would generate belief distributions for buyers and sellers that are further apart. While the theoretical effect of this on the median belief is ambiguous, for the particular example considered here, a risk-aversion parameter of A = 0.25 would generate a median belief of 0.65.

Furthermore, changes in beliefs within the population of traders could make their presence known through changes in bids and offers without any change in the equilibrium price. That was essentially the point of my last post: any given equilibrium price is consistent with a broad range of belief distributions. By focusing on the complete distribution (rather than just a point estimate) one can get a better sense of where market perceptions really lie.

One interesting question that follows from the arguments advanced here is this: could one use an imputed belief distribution to predict short-term movements in the equilibrium price?

Not necessarily. Even if one felt that the belief corresponding to the median order was in some sense the best forecast regarding the likelihood of the underlying event, one would not be induced to place an order that moves the equilibrium price. This is simply due to the fact that bids lie below subjective beliefs while offer prices lie above them. If large numbers of individuals simply adopted the imputed median belief as their own forecast, they would be induced to enter bids and offers around this belief, affecting the variance of the belief distribution but not necessarily its median. Nevertheless, it is worth noting that high-frequency trading outfits in US equity markets do manage to use proprietary data feeds to make effective short-run price forecasts.

As Andrew Gelman put it in his (very kind) response to my earlier post:


Markets are impressive mechanisms for information aggregation but they're not magic. The information has to come from somewhere, and markets are inherently always living in the phase transition between stability and instability... This is not to say that prediction markets are useless, just that they are worth studying seriously in their own right, not to be treated as oracles.

Prediction markets are indeed worth studying seriously not only because they are complex and interesting mechanisms for information aggregation, but also because the simplicity of the contracts traded can allow strong inferences to be made about the behavior of market participants. And some of these insights could be generalized to apply to speculative asset markets with much greater volume, liquidity, and economic importance.
Posted by Rajiv at 3/14/2011 11:11:00 AM