The experience of watching election returns come in has become vastly more social and interactive than it was just a decade ago. Television broadcasts still provide the core pubic information around which expectations are formed, but blogs and twitter feeds are sources of customized private information that can have significant effects on the evolution of beliefs. And prediction markets aggregate this private information and channel it back into the public sphere.

All of this activity has an impact not only on our beliefs and moods, but also on our behavior. In particular, beliefs that one's candidate of choice has lost can affect turnout. It has been argued, for instance, that early projections of victory for Reagan in 1980 depressed Democratic turnout in California, and that Republican turnout in Florida was similarly affected in 2000 when the state was called for Gore while voting in the panhandle was still underway. For this reason, early exit poll data is kept tightly under wraps these days, and states are called for one candidate or another only after polls have closed.

This effect of beliefs on behavior implies that a candidate facing long odds of victory has an incentive to inflate these odds and project confidence in public statements, lest the demoralizing effects of pessimism cause the likelihood of victory to decline even further. Traditionally this would be done by partisans on television sketching out implausible scenarios and interpretations of the incoming data to boost their supporters. But with the increasing visibility of prediction markets, this strategy is much less effective. If a collapse in the price of a contract on Intrade reveals that a candidate is doing much worse than expected, no amount of cheap talk on television can do much to change the narrative.

Given this, the incentives to interfere with what the markets are saying becomes quite powerful. Even though trading volume has risen dramatically in prediction markets over recent years, the amount of money required to have a sustained price impact for a few hours remains quite small, especially in comparison with the vast sums now spent on advertising.

In general, I believe that observers are too quick to allege manipulation when they see unusual price movements in such markets. As I noted in an earlier post, a spike in the price of the Romney contract a few days ago was probably driven by naive traders over-reacting to rumors of a game-changing announcement by Donald Trump, rather than by any systematic attempt at price manipulation. My reasons for thinking so were based on the fact that frenzied purchases of a single contract (while ignoring complementary contracts) are terribly ineffective if the goal is to have a sustained impact on prices. If one really wants to manipulate a market, it has to be done by placing large orders that serve as price ceilings and floors, and to do this across complementary contracts in a consistent way.

As it happens, this is exactly what someone tried to do yesterday. At around 3:30 pm, I noticed that the order book for both Obama and Romney contracts on Intrade had become unusually asymmetric, with a large block of buy orders for Romney in the 28-30 range, and a corresponding block of sell orders for Obama in the 70-72 range. Here's the Romney order book: 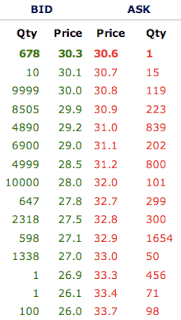 And here's the book for Obama: 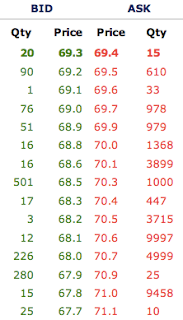 Since the exchange requires traders to post 100% margin (to cover their worst case loss and eliminate counterparty risk), the funds required to place these orders was about $240,000 in total. A non-trivial amount, but probably less than the cost of a thirty-second commercial during primetime.

Could this not have been just a big bet, placed by someone optimistic about Romney's chances? I don't think so, for two reasons. First, if one wanted to bet on Romney rather than Obama, much better odds were available elsewhere, for instance on Betfair. More importantly, one would not want to leave such large orders standing at a time when new information was emerging rapidly; the risk of having the orders met by someone with superior information would be too great. Yet these orders stood for hours, and effectively placed a floor on the Romney price and a ceiling on the price for Obama.

Meanwhile odds in other markets were shifting rapidly. Nate Silver noticed the widening disparity and was puzzled by it, arguing that differences across markets should "evaporate on Election Day itself, when the voting is over and there is little seeming benefit from affecting the news media coverage." Much as I admire Nate, I think that he was mistaken here. It is precisely on election day that market manipulation makes most sense, since one only needs to affect media coverage for a few hours until all relevant polls have closed. Voting was still ongoing in Colorado, and keeping Romney viable there was the only hope of stitching together a victory. Florida, Virginia and Ohio were all close at the time and none had been called for Obama. A loss in Colorado would have made these three states irrelevant and a Romney victory virtually impossible.

Given this interpretation, I felt that the floor would collapse once the Colorado polls closed at 9pm Eastern Time, and this is precisely what happened:

Once the floor gave way, the price fell to single digits in a matter of minutes and never recovered.

It turned out, of course, that none of this was to matter: Virginia, Ohio, and (probably) Florida have all fallen to Obama. But all were close, and the possibility of a different outcome could not have been ruled out at the time. The odds were low, and a realistic projection of these odds would have made them even lower. Such is the positive feedback loop between beliefs and outcomes in politics. Under the circumstances, the loss of a few hundred thousand dollars to keep alive the prospect of a Romney victory probably seemed like a good investment to someone.

Should one be concerned about such attempts at manipulation? I don't think so. They muddy the waters a bit but are transparent enough to be spotted quickly and reacted to. My initial post was retweeted within minutes by Justin Wolfers to 24,000 followers, and by Chris Hayes to 160,000 shortly thereafter. Attempts at manipulating beliefs are nothing new in presidential politics, it's just the methods that have changed. And as long as one is aware of the possibility of such manipulation, it is relatively easy to spot and counter. The same social media that transmits misinformation also allows for the broadcast of countervailing narratives. In the end the fog clears and reality asserts itself. Or so one hopes.
---


Update: The following chart shows the Obama price breaking through the ceiling just before the polls closed in Colorado:

It's the extraordinary stability of the price before 8:45pm, which was sustained over several hours, that is suggestive of manipulation.